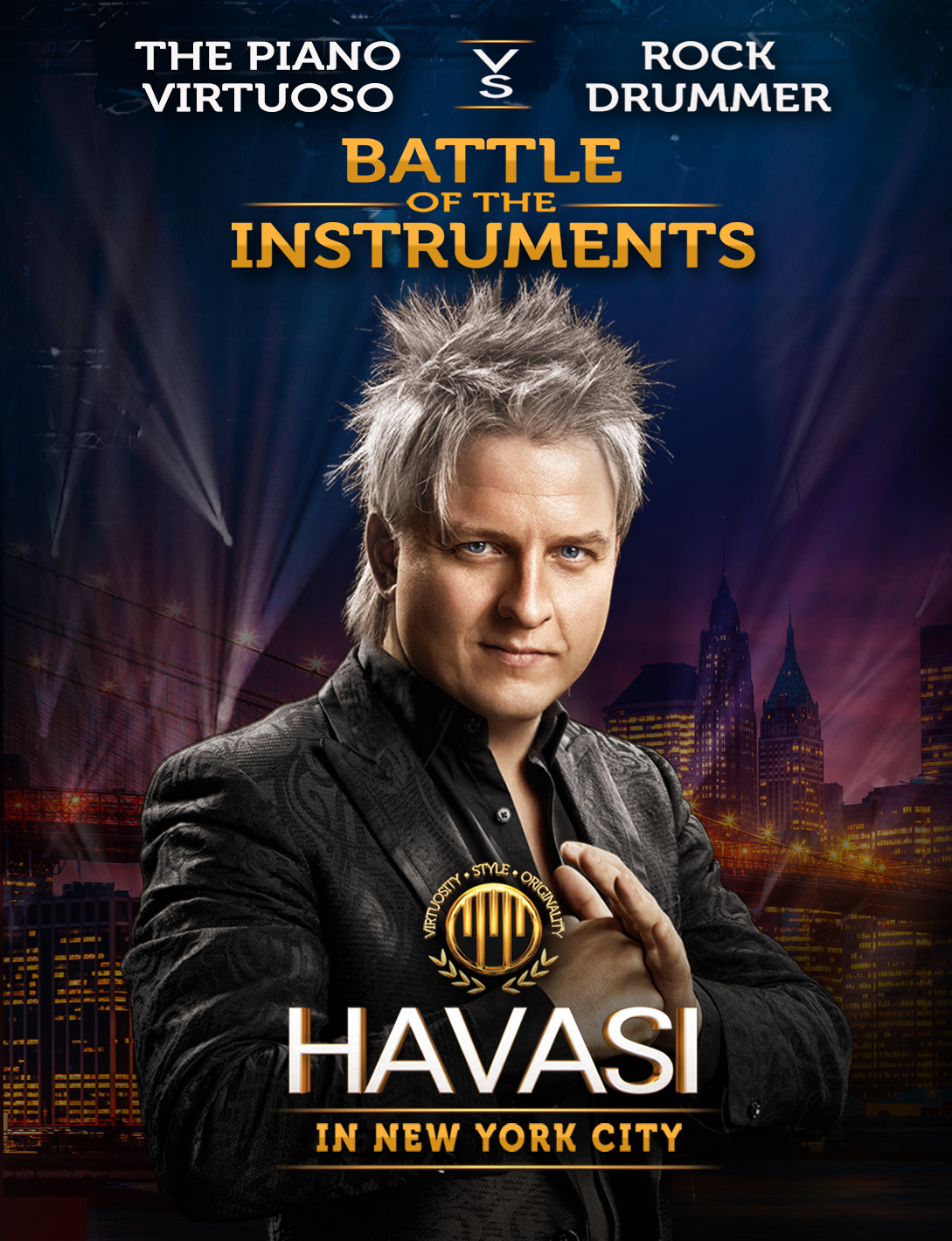 Showtime!
Ticket Information:
GET TICKETS
50% Child Discount
Up to 18 years
Official tickets are only available from Ticketmaster. Tickets for children and young people up to the age of 18 are available with 50% discount. Join the official event for updates about the concert:
JOIN THE EVENT

Following his hugely successful debut at the Sydney Opera House, the Barbican in London, and two sold-out Pure Piano performances at the Town Hall in 2019, HAVASI returns to New York City with special Drum & Piano performances in 2021 on Oct 17, Sunday, starting at 4:00 PM and 20:00 PM. Tickets for children and young people up to the age of 18 are available with 50% discount.

Unlike anything you've heard before
The program is 100% original works by one of the most fascinating and versatile young composers of today, HAVASI. His innovative music is unlike anything you have heard before; fresh, passionate and entertaining at the same time. His unique musical style is blending the depth and discipline of classical music with the dazzling diversity of world music and the sheer power of rock.
Solo Piano + Rock Drums
This is a rare and unique opportunity to meet the modern classical composer who usually only performs in the largest stadiums in Europe. In this special concert HAVASI will perform his latest and most loved pieces in their original form, as they were composed for solo piano. The show in New York will also feature a special guest artist: a rock drummer...
The Battle of Instruments
The highlight of the concert is the Drum & Piano block. Two great artists play to the same musical heartbeat. The conservatoire-trained classical pianist, and the rock drummer now appear together on the same stage, united in a shared desire to make great music across barriers of genre. 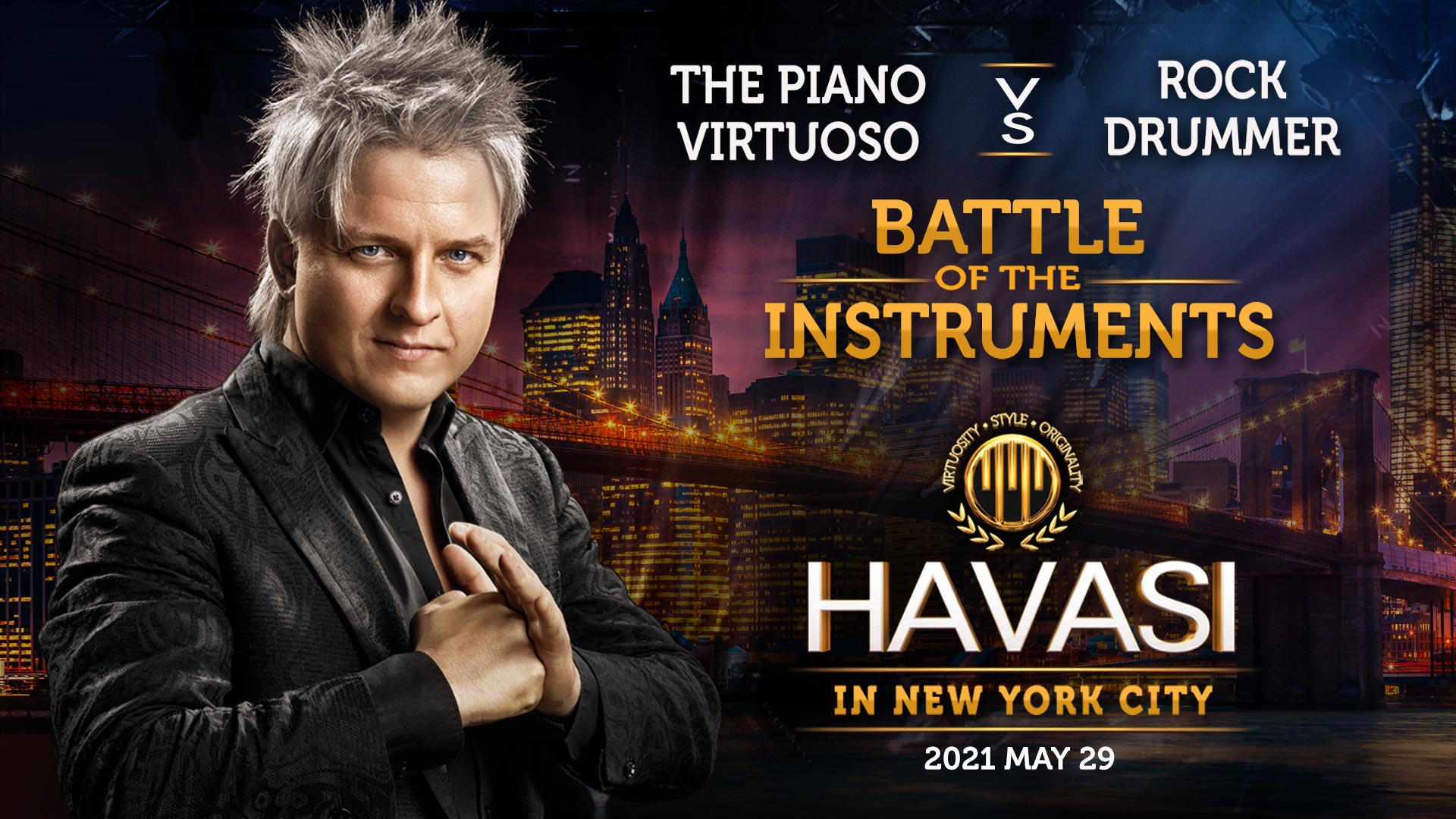 Their performance is both a collaboration and a duel, a spellbinding clash that creates musical sparks while also revealing the unexpected: the delicacy of the drum kit, the percussive power of the piano.
Family-friendly Concert
HAVASI’s charismatic personality, showmanship and the stunningly spectacular visual component of the show is engaging entertainment for the entire family where children can encounter the piano in a modern setting they will truly enjoy. 50% discount is available for children and young people up to the age of 18.
About HAVASI
A graduate of the world-renowned Franz Liszt Academy of Music, with a deep knowledge of classical tradition, who is also seeking to make classical instruments relevant to the modern age in a deeply moving yet entertaining way. He has performed his original compositions at some of the world's most prestigious concert halls, such as the Carnegie Hall in New York or the Sydney Opera House. Havasi is one of the rare contemporary composers with the rock star-like charisma that can sell out huge stadium concerts. He played to 46,000 people, filling the Budapest Arena 4 times over in a single weekend. In recent years he also sold out the Mercedes-Benz Arena in Berlin, the Tauron Arena in Krakow and the Wiener Stadthalle in Vienna. HAVASI Symphonic has been a Billboard #2 international concert, #1 album on iTunes, and an absolute #1 on Deezer: #1 Artist, #1 Album, #1 song.
Join the newsletter for HAVASI concert news: