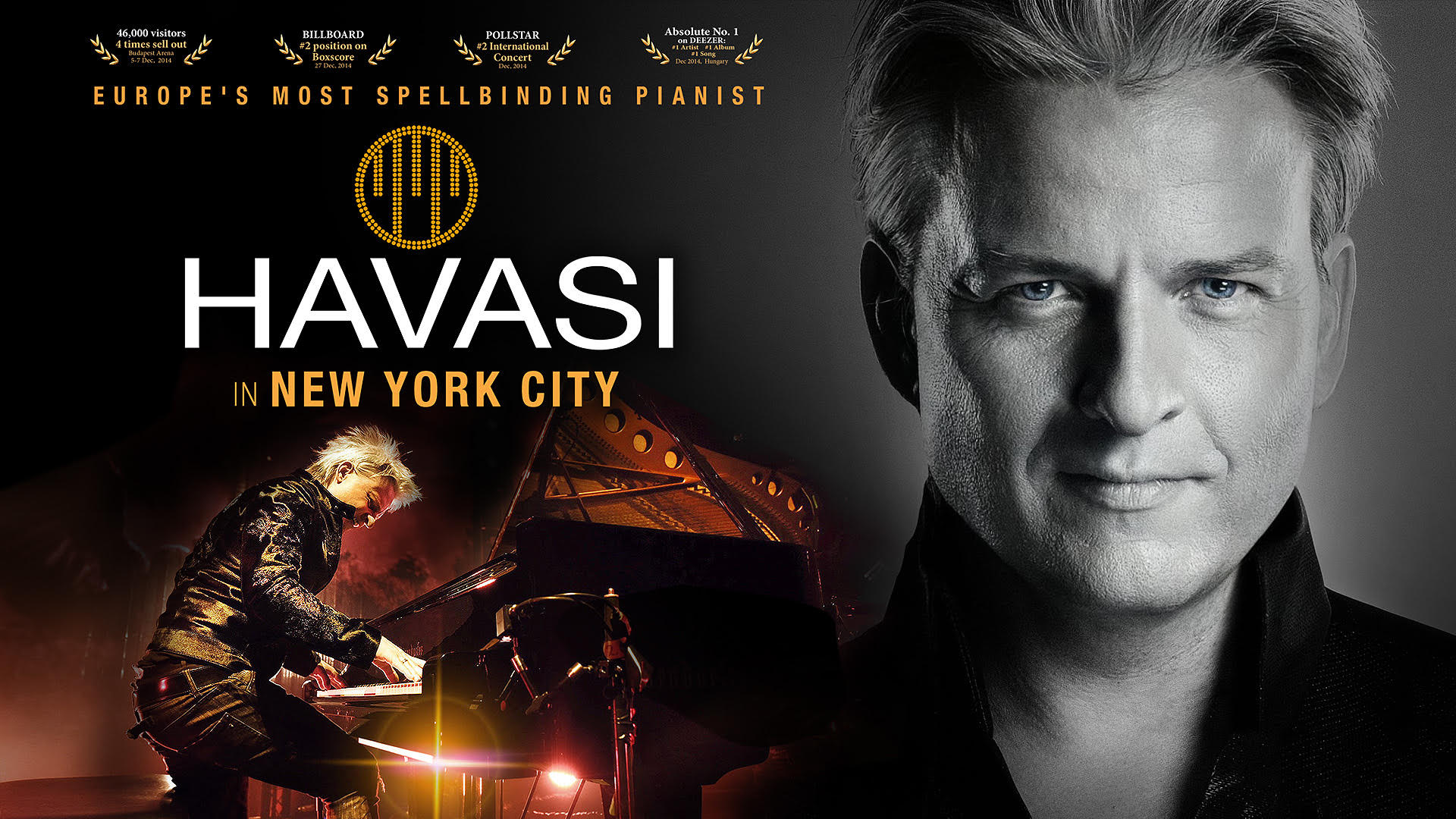 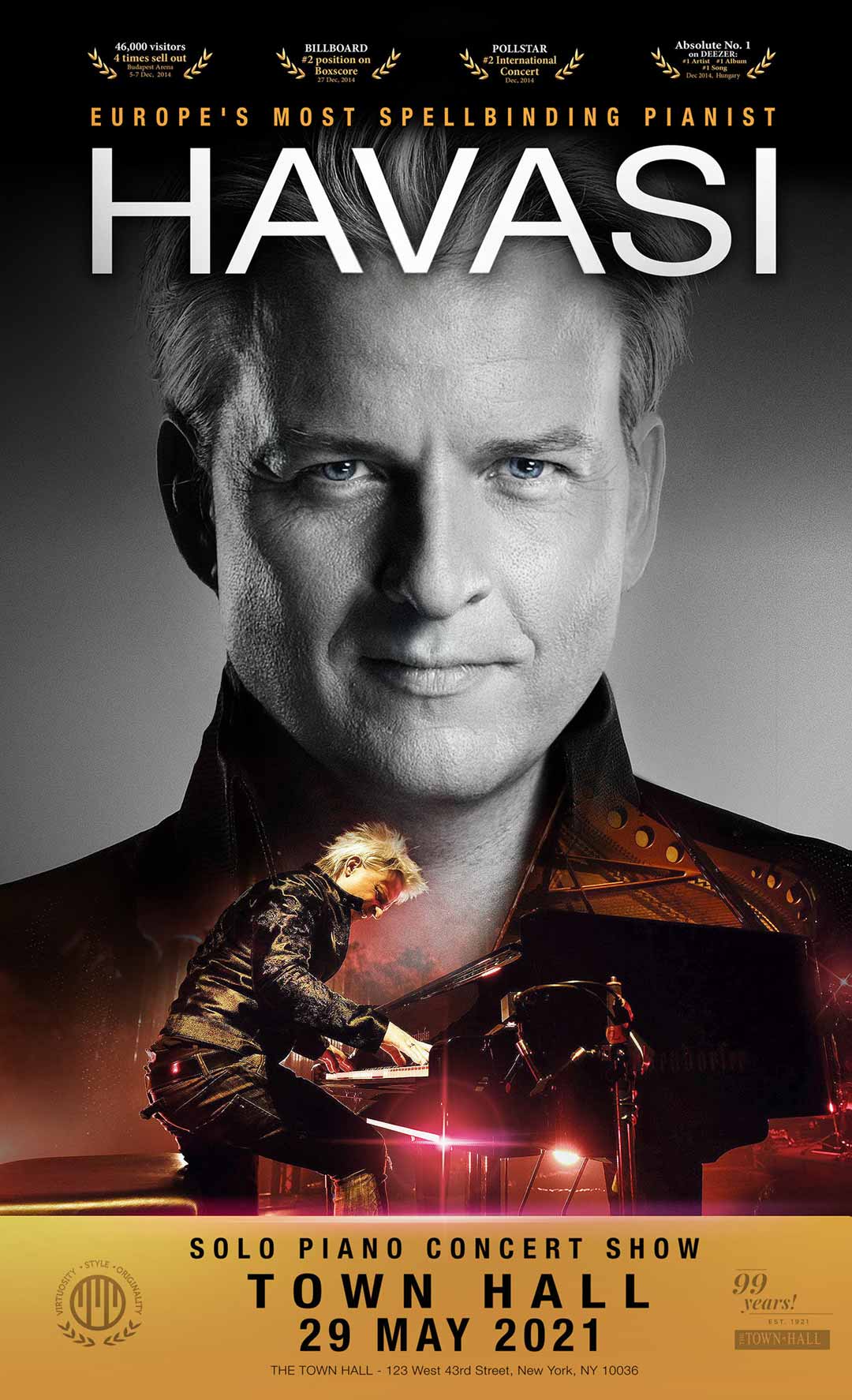 Showtime!
GET TICKETS
Ticket Information:
50% Child Discount
Up to 18 years
Official tickets are only available from Ticketmaster. Tickets for children and young people up to the age of 18 are available with 50% discount. Join the official event for updates about the concert:
JOIN THE EVENT

This is Mind-blowing Solo Piano Show, with more than 500,000 tickets sold

THIS IS A MIND-BLOWING SOLO PIANO SHOW, WITH MORE THAN 500,000 TICKETS SOLD WORLDWIDE.

The biggest sensation of the European sports arenas and concert halls from London to Berlin, comes for a one night only show to the Lincoln Center in New York City. Don't miss the chance to experience this musical prodigy, the pianist loved by millions.
WEMBLEY ARENA, LONDON 2019

This is something else,
this is HAVASI

This is something else, this is HAVASI
The program is 100% original solo piano works by one of the most fascinating and versatile young composers of today, HAVASI. His innovative music is unlike anything you have heard before; fresh, passionate and entertaining at the same time.
Expect to be surprised: even today a single piano is perfectly enough for a charismatic artist to deeply move and entertain the audience, while he reveals his secrets about the music that has captivated the hearts of so many people worldwide.
This is not a classical concert
You don't have to behave, you don't have to be quiet. You don't have to dress up; jeans and a T-shirt are fine. You can scream when you feel the need, you can clap when you feel the rhythm. You can bring your kids. And most importantly: you can enjoy the music you’ve never heard before. And you can be sure. You will never forget this experience.
Family-friendly Concert
Family-friendly Concert
HAVASI’s charismatic personality and showmanship is a guarantee for engaging entertainment for the entire family where children can encounter the piano in a modern setting they will truly enjoy. 50% discount is available for children and young people up to the age of 18.

About HAVASI
About HAVASI
HAVASI is a Hungarian contemporary composer and piano virtuoso that is redefining classical music. He possesses an exceptional rock star-like charisma that sells out stadium concerts and captivates audiences of all ages. In recent years he sold out the iconic Wembley Arena in London, the Mercedes-Benz Arena in Berlin, and the Tauron Arena in Krakow among many other arenas in Europe. HAVASI Symphonic has been a Billboard #2 international concert, #1 album on iTunes, and an absolute #1 on Deezer: #1 Artist, #1 Album, #1 song. HAVASI has also performed his original compositions at some of the world’s most prestigious concert halls, such as the Carnegie Hall in New York, The Sydney Opera House or the Konzerthaus in Vienna. He is a graduate of the world-renowned Franz Liszt Academy of Music, with a deep knowledge of classical tradition, who is also seeking to make classical instruments relevant to the modern age. His innovative style elevates classical music with sounds of traditional folklore and pop rock elements, making him the most unique performer in the world.
50% Child Discount
Up to 18 years
Official tickets are only available from Ticketmaster. Tickets for children and young people up to the age of 18 are available with 50% discount. Join the official event for updates about the concert.
GET TICKETS
JOIN THE EVENT